In the last few weeks, the spotlight of international debate shifted away from Syria and focused instead on the events related to North Korea. Recent developments in the region bear an enormous potential for a widespread  conflict with possible nuclear strikes. The threat of use of nuclear weaponry was believed to be a relic of the cold war era, but in recent days – according to US officials  – it has become possible to consider nuclear strikes as an option “on the table.”

The conflict exists since the creation of both North and South Korea after the Second World War, and grew into a fully fledged war between June 1950 and July 1953 between the communist North Korea and the capitalist South Korea, drawing in all of their allies including China and the USA. The conflict has never ended, with both sides agreeing upon an armistice. Tensions have always been high, however at the moment, they seem to have become higher than ever before.

The situation was delicate over the last few years with North Korea’s pursuit to develop and test nuclear weaponry, but this time the situation is different. The US has previously deployed warships into the area for drills, as well as a deterrent to protect South Korea (for example in 2016), however under the new administration, direct threats made by the US Government have increased. This verbal escalation was clear during Vice President Price‘s visit to the demilitarized zone (DMZ) on 17th April 2017 when he threatened North Korea that the Massive Ordnance Air Blast (MOAB, also known as the ‘Mother of all Bombs’) used by the US in Afghanistan could also be used against North Korea[i]. This claim prompted Russia to respond by claiming to have the “father of all bombs”.[ii]

Although the Peoples Republic of China has traditionally supported North Korea, this seems to have deteriorated. This was seen in the report by the state-owned television channel CCTV, which reported that Air China had stopped flights to Pyongyang, the capital of North Korea. This was later corrected by Air China announcing that only some flights were canceled due to declining demands[iii], however this effectively demonstrated a rift in the diplomatic relations between both countries.[iv] Another sign for the worsening relationship between China and North Korea was the announcement by the Chinese Ministry of Commerce to ban coal imports from North Korea by the end of 2017 and a report that China refused a Korean coal delivery worth $1m in February 2017.[v] Given the various sanctions currently imposed on North Korea and keeping in mind that coal trade with China has been the North Korea’s main source of income, this threat has the ability to damage the North Korea’s shrinking economy and isolate the nation even further.

This new separation can also be traced when international naval traffic is monitored. The map below shows that many vessels – including many Chinese cargo vessels – avoid North Korean waters. 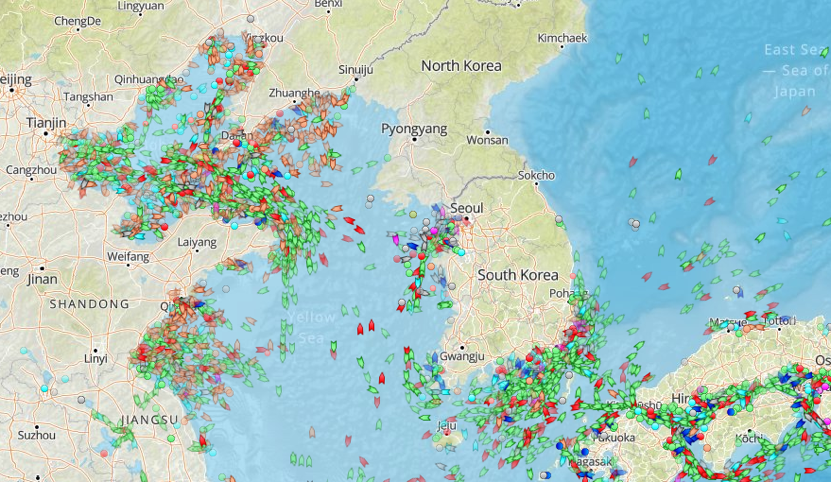 The rift between the former allies could present an opportunity to resolve the problem of North Korea’s developing nuclear programme, however it bears great risks. If China enforces the coal ban, this could lead to a total collapse of the North Korean economy and create pressure on Chairman Kim Jong Un to either stop his nuclear programme, or face his removal from power without foreign military intervention.

Although this option does avoid the use of nuclear weapons, it could lead to a civil war in North Korea if Kim Jong Un chooses to fight. This in turn could lead to the proliferation of nuclear material, which would need to be prevented by all means, otherwise international security will be at stake.

If China does not continue to increase pressure on North Korea, and all parties do decline to reduce their threats, the possibility of a nonlethal solution to the conflict is weakened. So far there is still the possibility of preventing an armed conflict, however this must be done through China rather than by addressing Kim Jong Un. Based on China’s actions of over the past few months, it would be reasonable to assume that China does not want a conflict on their border and would put diplomatic pressure on North Korea to avoid this. Nevertheless, it must be made clear to all nations concerned that in the case of a war with North Korea there would be no winner but only losers, especially if the conflict turns nuclear.