Proclaimer: In the following essay the author assumes a multipolar world, defining superpowers by the height of their military budget (over USD 60 billion) and the number of active soldiers (over 750,000).

Since the end of the Cold War era, armed conflict between superpowers seems to be a thing of the past. This was partly caused by the struggle to maintain a bipolar world following the decline of the USSR. Although the USA and the USSR fought a number of proxy wars against each other – except for the Cuban missile crisis, the status quo was relatively stable.

Since then, the world has rapidly changed: to analyze the state of security, one must not forget the significance of the BRIC(S) states. These states – Brazil, Russia, India, China and South Africa – host 42% of the worlds population and have won significant influence on the world stage, whereas many of the “old” European powers have taken more minor roles.

Whilst the South Chinese Sea conflict is not new, it has the potential to affect the whole world. Despite this conflict not being present in the media or the public does not mean that did not exist: to analyze the conflict, as well as its threat potential, the actors and the objectives need to be clarified. 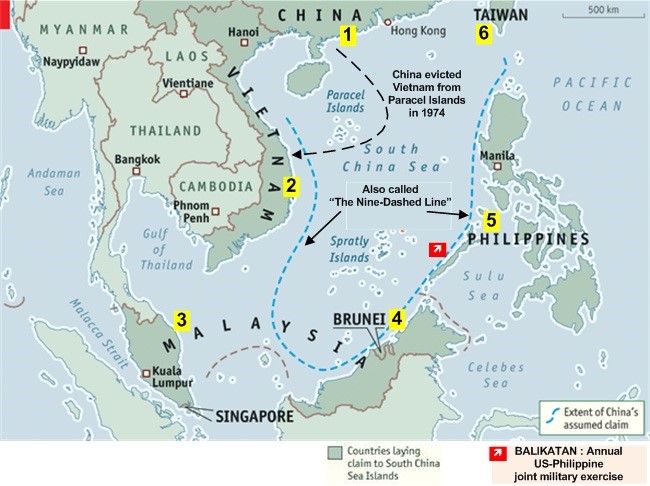 Other nation states involved in this conflict are Brunei, China, Vietnam, Taiwan, the Philippines and Singapore; more further afield Australia, Japan, Russia and the USA.

On first glance, the problem appears one of which over who will control a collection of small uninhabited islands; however on closer look, deeper and more complex objectives can be seen.

The main objectives are hegemonic concerns between China and the USA, as Beijing tries hard to break the hegemony of the US by expanding its territory to the south and intimidating its neighbors, one of which is Japan. As both Japan and China share a long history of enmity and a further territorial dispute the Senkaku Islands, it clear to see why Japan has willingly joined the dispute over the South Chinese Sea.

Another factor is that the most important Asian Sea route passes waters claimed by China by the “Nine-Dashed-Line” (see Diagram 1). This territorial claim however has not been tolerated by China´s neighbors and the USA. As China is currently operating a highly expansive foreign policy and has started developing military facilities, the regional nations are becoming increasingly nervous and want to stop this expansion.

The United Nations Convention on the Law of the Sea (UNLCOS) is important in this context. Naval passages may not be blocked and artificial islands in the Exclusive Economic Zone (EEZ) are not to be used for military purposes. As a party to UNCLOS, China claims it not only owns the islands but also the 200 miles EEZ around it – this second point is lawful for a continental shelf, however not for artificial islands.

The relatively small regional nations are looking for a strong ally to balance out the superpower China, which additionally has the same goals in order to protect them – the so-called neo-realism theory. Diagram 2 illustrates this concept in both theory and practice. Over the last few years, the USA has increased its activity in the region by conducting exercises – using naval vessels, either tests of new equipment or vessels stationed locally, or aircraft flyovers – all indented to secure and inspire confidence in its allies. 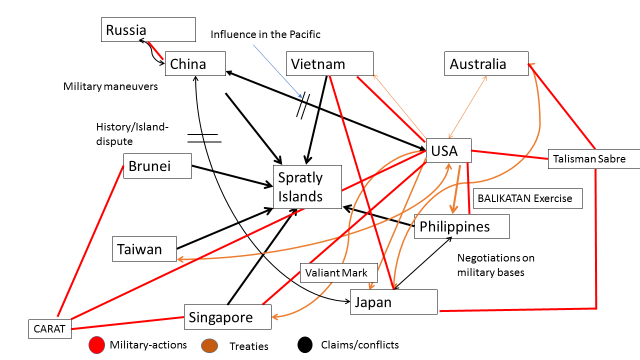 Diagram 2 – by the author

Geopolitical developments have demonstrated some interesting alliances. Old enemies such as Vietnam and the USA are joining together to limit the Chinese expansion. In turn, China has gained support from Russia.

Simply from looking at the military capabilities, in particular the relative strengths of active forces and military budgets (Diagram 3), it is clear that this conflict has enormous potential. One cannot forget that three actors – China, Russia and the USA – additionally have WMD capabilities. 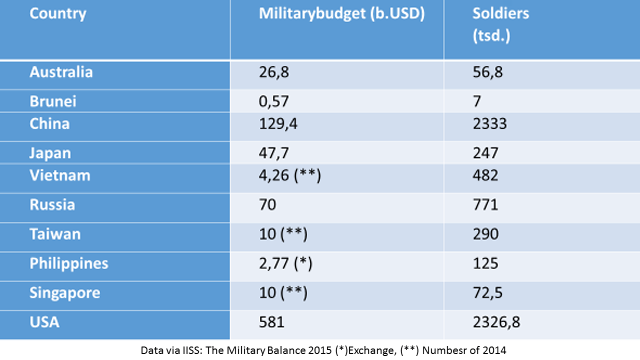 Diagram 3 – by the author

In conclusion, we need to face the fact that this conflict bears enormous potential for escalation which may be triggered by various sources of provocation from all sides, such as interception of flights, blockade of sea routes, close passages to islands and diplomatic misunderstanding. Although a war would be theoretical possible, it is most unlikely to occur because a conflict of this size would serious affect the global population and economy. One significant hope remains as long as the leaders of the nations involved act in a rational manner, as the cost of war significantly exceeds any possible benefits.

Understanding Lahore: the Dynamics of Religious Minorities in Pakistan